(As a matter of coincidence, SiFive recently released a draft spec of the protocol.)

My preferred method of learning is first to understand the engineer's original intent before enhancing or leveraging code.  This means taking things apart.

The most difficult aspect in getting something up was understanding the inner workings of SystemBus class.  I kept hitting run time assertions and it was helpful to manually sketch out the connections between the TL objects: 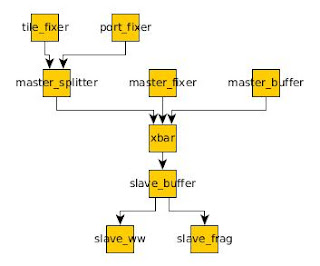 Here is a summary of my findings.

I identified the minimal set of configuration knobs for this experiment.

This is the system itself.  It extends BaseComplex.  Not RocketComplex.

This should be familiar.  It is your top level Chisel3 module.

Here are the important parts of the system generator.  This will generate your firrtl and verilog output.

Becoming Functional is a book written by Joshua Backfield that lays out steps to transform oneself into a functional programmer.

It is a short book (under 150 pages) and is a very enjoyable read.  I did learn a thing or ten.  I refer back to the book whenever I have a suspicion that a certain aspect of my code can be improved.

The most interesting revelation is how my background in hardware design and verification engineers lends well to functional programming.  Functional concepts seem to be come naturally to me.  I am no expert by any means, but looking at Scala code doesn't frighten me anymore.
Posted by Unknown at 9:27 AM 0 comments

Email ThisBlogThis!Share to TwitterShare to FacebookShare to Pinterest
Labels: Scala

Here is a collection of notes from my research on TPU architecture.

First TPU developed is to accelerate the inference phase of neural networks (not training).  The heart of the TPU is a 65,536 8-bit MAC matrix multiply unit and a large 28 MB software-managed on-chip memory.  An activation unit takes care of the hardware activation functions (ReLU, sin, cos).  One benefit of TPU architecture is deterministic execution model when compared to non-deterministic (time varying) CPU and GPUs.  15X-20X faster than contemporary GPU or CPU and better 30X-80X better TOPS/Watt.

NN imitate brain-like functionality and based on simple artificial neuron.  This "neuron" is a nonlinear function of a weighted sum of its inputs.   The "neurons" are connected in layers.  The "deep" part of DNN comes from going beyond a few layers.  Made possible because because of higher compute capability.

Two phases of NN are called training (or learning) and inference (or prediction).  Today, all training is done in floating point using GPUs.  A step called quantization transforms floating-point numbers into narrow integers (sometimes 8 bit) which are good enough for inference.

Designed to be a coprocessor on PCIe bus.  The host sends TPU instructions for the coprocessor to execute.


Data flows in through the left and weights are loaded from the top.  Execution of matrix multiplies occurs in a systolic manner (no fetch, excute, writeback sequence).

(Interesting fact. 15% of papers at ISCA 2016 were on hardware accelerators for NN. 9 mentioned CNN, only 2 mentioned NN).

Results TL;DR they are good.

Clock rate has little benefit with or without more accelerators.  More aggressive design may have increased clock rate by 50%.    Why? MLP (multi-layer perceptron) and LSTMs are memory bound, but only CNN are compute bound.